GLENVIEW, Ill., Feb. 17, 2017 /PRNewswire/ -- Combined Insurance, a leading provider of individual supplemental accident, disability, health, and life insurance products, and a Chubb company, demonstrates its continued commitment to giving back to U.S. servicemen and women with a $30,000 donation to Luke's Wings—recipient of the company's philanthropic sales program for the third consecutive year. 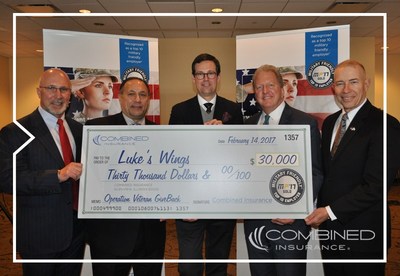 The donation to Luke's Wings stemmed from Combined Insurance's Operation Veteran GiveBack program—a two-week program in which the top two Zones with the highest in-field percentage during the last two weeks of the year (cumulatively) will earn the honor of presenting a donation to a military or military veteran- related charitable organization of their choice.

"We are honored to support Luke's Wings and their mission of bringing our nation's families together," said Tony O'Dierno, Senior Vice President and Zone Manager for Combined's East Zone. "Our zone worked hard during this program to ensure we received the privilege of giving back to our nation's heroes."

Luke's Wings is a national organization based in Washington, D.C. that provides free travel and travel planning services for the families of wounded warriors and veterans so that they can be together during times of treatment and recovery. Fletcher Gill, Chief Executive Officer, Co-Founder and Chairman of the Board for Luke's Wings, said the organization thrives on partners like Combined Insurance due to the constant needs of flights for families across the nation.

"Our partnership with Combined Insurance has shown us how one organization can make such a lasting impact and difference to our mission and the families we help every day," said Gill. "We are grateful to have the opportunity to continue providing thousands of flights and ensuring no servicemember is alone at the times they need us most."

This year, Combined Insurance was ranked once again as a Top 10 Military Friendly® Employer for 2017 by G.I. Jobs Magazine. This is the fifth consecutive year that Combined Insurance has made the top 10 employer list and third consecutive year in the top 5—the company was previously named the Number One Military Friendly® Employer in the nation in 2015 and 2016.

Combined Insurance has an A+ (Superior) financial strength rating by A.M. Best, one of the world's top insurance rating firms. The company has also been recognized for seven consecutive years on Ward's 50® Top Performing Health-Life Insurance Companies list.