GLENVIEW, Ill., March 17, 2017 /PRNewswire/ -- Combined Insurance, a leading provider of individual supplemental accident, disability, health, and life insurance products, and a Chubb company, demonstrates its continued commitment to giving back to U.S. servicemen and women with a $20,000 donation to the Fisher House Foundation—a national network of homes that provide military families housing close to a loved one during hospitalization for an illness, disease or injury.

The donations stemmed from Combined Insurance's Operation Veteran GiveBack program—a two-week program in which the supplemental insurer's sales regions competed with each other. The regions that finished in the top two positions had the opportunity to give back to a military or veteran-related charitable organization of their choice.

Cruz, Regional Director, and U.S. Air Force Veteran, who currently leads the Latino market in Florida and was instrumental in the company's Latino market launch in 2013, said this program motivates agents and managers because they are able to give back to the community.

"We are honored to support our local Miami Fisher house and the military families they serve," said Cruz. "Our Latino agents and managers make this program successful because of their commitment and dedication to supporting our nation's veterans giving back to their communities."

"We are so honored that Combined Insurance continues to support our Fisher Houses across the nation," said Carolyn Soucy, Fisher House Manager, Miami VA Healthcare System. "Our mission of providing a network of homes for families of veterans is made possible by the support of organizations like Combined Insurance."

This year, Combined Insurance was ranked once again as a Top 10 Military Friendly® Employer for 2017 by G.I. Jobs Magazine. This is the fifth consecutive year that Combined Insurance has made the top 10 employer list and third consecutive year in the top 5—the company was previously named the Number One Military Friendly® Employer in the nation in 2015 and 2016. 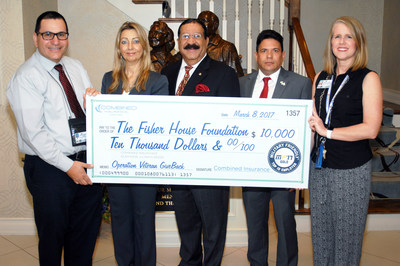