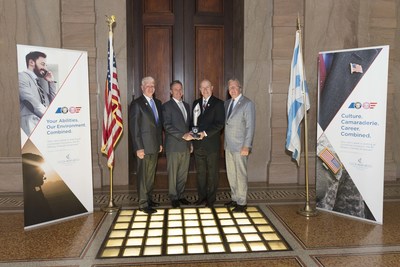 "Veterans exemplify commitment and courage, two important qualities that align with both Combined and Chubb's valued traits," said Kevin Goulding, Combined Insurance President. "This magnificent award is a testament to our commitment to doing the right thing—hiring and supporting veterans and their family members who have sacrificed so much for our country."

The ceremony began with a welcome by Doug Abercrombie, SVP and Chief Agency Officer at Combined Insurance and introduction to the Color Guard from Rickover Naval Academy, and the singing of the National Anthem performed by Alleece Baker.

During the program, Mike Stevens, CEO of VIQTORY, brought to the stage, Bob Wiedower, VP of Sales Development and Military Programs to accept the award.

"As a retired Master Chief Petty Officer of the Navy, I know how important it is to join an organization where veterans can continue to serve others and expand their skills in a civilian career" said Stevens. "I am proud to give this award to Combined Insurance; and recognize them for their dedication to supporting the military community."

Since launching its veteran recruiting program in 2010, Combined Insurance has partnered with the Department of Defense Military Spouse Employment initiative, and guarantees any veteran or military spouse an interview with the company. This partnership is an employment and career partnership connecting military spouses with hundreds of partner employees who have committed to recruit, hire, promote and retain military spouses in portable careers.

In addition to providing meaningful employment, Combined Insurance also gives back to military and veteran-focused charities through employee volunteerism and corporate donations. The company has given back to organizations, such as Luke's Wings, The Fisher House Foundation, USO of Illinois and Heartland Alliance – Support Services for Veteran Families (SSVF).

About Combined Insurance
Combined Insurance Company of America (Chicago, Ill.) is a leading provider of individual supplemental accident & health, disability, and life insurance products and a Chubb company. With a tradition of nearly 100 years of success, Combined Insurance is committed to making the world of supplemental insurance easy to understand. The company has an A+ rating by the Better Business Bureau and is one of Ward's Top 50® Performing Life-Health Insurance Companies. Combined Insurance is ranked the number one Military Friendly® Employer in the over $1B revenue category for 2019 by VIQTORY. This is the company's eighth consecutive year on the top 10 list and fifth consecutive year in the top 5—Combined Insurance was previously named the number one Military Friendly® Employer in the nation for 2015 and 2016. For more information, please visit combinedinsurance.com.

About VIQTORY:
Founded in 2001, VIQTORY is a service disabled, veteran owned small business (SDVOSB) that connects the military community to civilian employment, educational and entrepreneurial opportunities through its G.I. Jobs ® and Military Friendly ® brands. VIQTORY and its brands are not a part of or endorsed by the U.S. Dept of Defense or any federal government entity. Learn more about VIQTORY at VIQTORY.com.